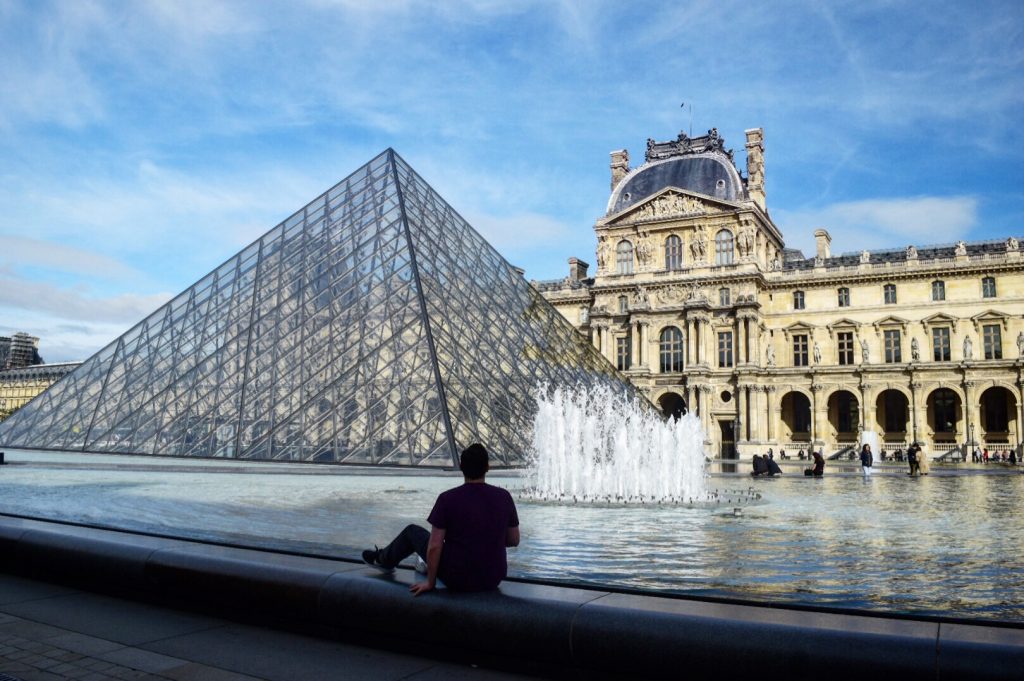 As I slowly work through what is an enormous bucket list of travel destinations and tourist sites, Paris became clear as one such adventure that could be quickly organised and raced around over the course of a long weekend.

My french was rusty but my ambitions were clear: See it all.

I took the Eurostar from London because the return was less than £60, which was a bit of a bargain. I stayed in an AirBnB studio flat (in the central 2nd arrondissement) for around the same price each night. Adding food, drinks and entry to all of the sites I still managed to do three days away for less than £400, all in. Not bad at all for a city known to be expensive.

No sooner had I arranged and checked into my accommodation than I was on to the very affordable and easy-to-use metro/underground. I took the train out to the Eiffel Tower to see one of the world’s most famous landmarks. I spent hours there, taking photos from all angles and enjoying the black night sky and lights of the tower as my canvas.

What struck me most was how tall the tower was. I mean, I know that sounds obvious but when you take into account the fact it was built for an exhibition and not intended to be up all the time, you have to consider how rigid and sizeable it is.

I’d put off climbing the tower for a until the next day but this was a great way to start the trip!

I decided to start my first full day by going north. La Basilique du Sacré Cœur is in the 18th arrondissement of Paris, better known as Montmartre, and it’s the highest point of the city. The views across to the horizon are tremendous, but turning your back to those for a moment, the Sacré Cœur is extremely pretty as well.

Walking back from Montmartre to the city centre, aiming for the Siene, picking up some fruit and water on the way, was a fantastic 45 minute walk, breathing in some of Paris’ prettier neighbouroods.

I made my way to Musée du Louvre simply to take some photos, again planning to go in later at night when it was likely to be quieter. After an hour of photos and a small chillout by the glass pyramids, I decided to being my cultural experiences at the Musée d’Orsay. Friends had pointed out d’Orsay would be manageable, and it is, it’s tiny compared to the Louvre, but still takes several hours to make your way around.

Unlike the Louvre, which has classical art, the d’Orsay is full of the city’s modern art (pieces range from 1848 to 1914). Housed in an old train station, it’s a stunning place to sit amongst Van Gogh, Renoir and Monet. What I enjoyed most about it was the countless number of students who were drawing the statues and other pieces of art. It was a wonderful visit, even for those who have no understanding of modern art.

Having had my fill of art, I took a walk along the River Seine, past two palaces to the world famous Champs-Élysées. I really enjoyed the hour-long walk from the d’Orsay all the way up to the top of the Champs-Élysées to the Arc de Triomphe. By this time it was getting quite late in the day and I decided a few night-time photos of the Louvre were required, so I took myself back to the pyramids, which were slowly stealing the show, for a couple of hours night-time photography.

The Musée d’Orsay clock from the inside

Eiffel Tower from underneath

Having left a few of my most-looked-forward-to activities to this final full day, I rose early and set off for a climb up the Eiffel Tower.

The Tower has three levels. You can walk up the first two but there are also lifts. You can then transfer and go up to the third level, which was too high for me. So I took the stairs and enjoyed the exercise, as well as the ironwork, both up and down to the second level.

After the obligatory photos of Paris, including a fee selfies, I had the most French brunch I could muster: a croque monsieur in the restaurant of the Eiffel Tower.

A quick walk along the Seine then took me to the now famous love locks left on the water’s edge, before a trip to Notre Dame. This cathedral was very pretty and well worth the walk, but my favourite part of the day was certainly still to come. Walking to the Latin Quarter in search of some crepes and gelato which were highly recommended in my Lonely Planet guidebook, I found my favourite neighbourhood in the city. Not only was the food and drink well worth the trip but this (the 5th and the 6th arrondissements) was the most architecturally interesting part of the city to me.

As the day was drawing to a close a had a quick change at my flat before returning to Musée du Louvre for my three-hour guided tour.

A quick couple of recommendations:

I’d be told far too often that the Mona Lisa was too small, and the queues to see her were too big, and the Louvre was too big, and it was too busy. And none of it made much sense. All of this will be conquered by following the above tips.

Our guide was fantastic and he gave the required context to understand the museum and much of the art. Without him I’d have not understood what I was seeing, the value of the pieces or their importance. This was amongst the best £30 I could have spent in Paris. Not only did we skip the queues but this night tour meant we saw the museum in a beautiful (lack of) light

Having gone all the way to Paris to see it, I think a tour is a must-buy! The Louvre stole the whole show. I loved learning about the art. I loved seeing the classical Greek statues, the rooms, the art collection and the old foundations (which date back to a fortress which was on the site, before being converted to a palace and later a museum). With three wings to see, we barely scratched the surface, seeing about half of one wing, but that just leaves me in a great place to see more next time.

Having satisfied my inner geek, I was able to spend the rest of the night taking photos of the pyramids before returning to my flat for my last night’s sleep.

The next day I was sadly on my way home.

Outside the Musée du Louvre

Inside the Musée du Louvre

This site uses Akismet to reduce spam. Learn how your comment data is processed.

Based in Edinburgh but often found in the wild, I'm a photographer, travel writer and adventurer. I'm passionate about Scotland and its stunning hidden gems. I love capturing outdoor beauty and sharing my recommendations with others.

I hope you enjoy looking around. If you would like to buy any of my photographs, or would like to talk, just pop me an e-mail: hello@willmackenzie.co.uk.

What are you looking for?